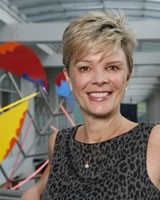 Professor Kathryn North AM is Director of the Murdoch Children’s Research Institute and the David Danks Professor of Child Health Research at the University of Melbourne.

Professor North is trained as a physician, neurologist and clinical geneticist and in 1994, was awarded a doctorate for research in neurogenetics. She completed a postdoctoral fellowship in the Harvard Genetics Program.

Professor North is a national and international leader in Genomic medicine.  In 2014, Professor North was appointed as Co-Chair of the Global Alliance for Genomics and Health – a collaborative network of over 400 organisations across over 45 countries funded by the NIH and the Wellcome Trust (genomicsandhealth.org). Commencing in 2016, she leads an NHMRC-funded national network of over 40 institutions –  the Australian Genomics Health Alliance (AGHA). The goal of AGHA is to provide evidence and practical strategies for the implementation of genomic medicine in the Australian health system.

Professor North has received a number of awards including the GSK Australia Award for Research Excellence (2011), the Ramaciotti Medal  for Excellence in Biomedical Research (2012) and Member of the Order of Australia (AM) for service to medicine in the field of neuromuscular and neurogenetics research (2012). In 2012, Professor North was appointed Chair of the National Health and Medical Research Council Research Committee and in 2014 was appointed as a Foundation fellow of the Australian Academy of Health and Medical Science. She chairs the International Advisory Board of the Great Ormond Street Institute of Child Health (UK) and is a member of the Board of the Victorian Comprehensive Cancer Centre.